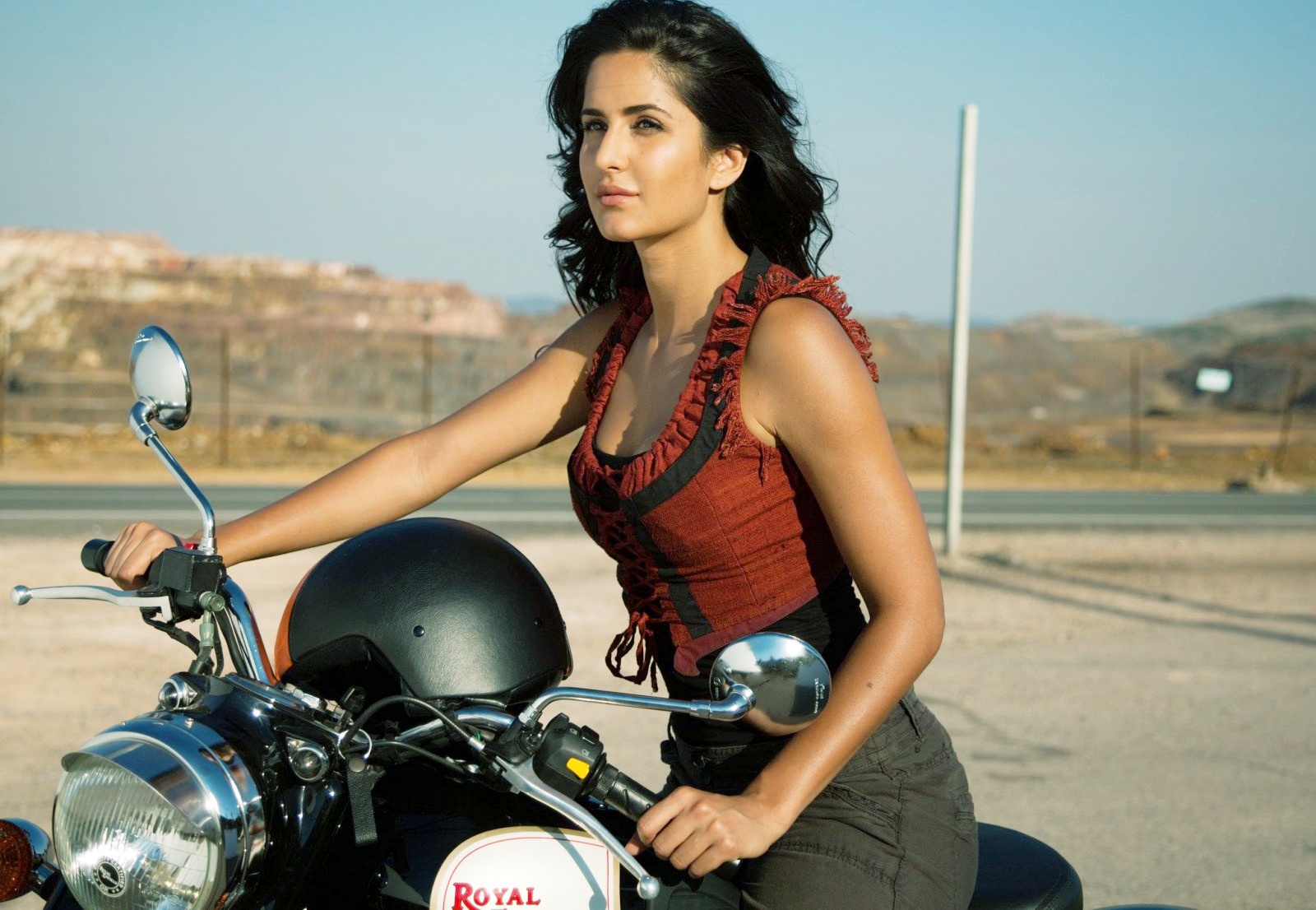 Hindi cinema has always had a strong relationship with two-wheelers especially motorcycles, but scooters and even mopeds have featured in some memorable sequences over the years. Though I have used the word bikes in the title, the list contains scenes involving bikes, scooters and mopeds. Personally, I have always been a huge fan of motorcycles because, for me, riding one feels like nirvana. I get this weird sense of being in control of my life, turning whichever way I feel like. Bollywood too has used them as much more than mere props, at times to add machismo, other times as an integral part of the personification of character being depicted.

Starting off the list is Kaka aka Rajesh Khanna with the golden voice of Kishore Kumar, cruising in the hills on a motorcycle with the gorgeous Hema Malini sitting behind her. Just like there will never be a 'Best of Kishore Kumar' list without this song, there can't be a list of 'Memorable Bike Sequences' without this song either. The nirvana and freedom I had mentioned earlier, well the key to that is possibly in the lyrics of this song...if you can find it.

Arguably the best Hindi film of all time. There is simply no other film like it, simply because, everything about the film was iconic. From unforgettable characters (Jai, Veeru, Thakur, Gabbar, Basanti) and dialogues ("Kitne aadmi the"), to evergreen scenes (Veeru water tank, Itna sannata kyun hai bhai) and songs (Mehbooba Mehbooba, Jab Tak Hai Jaan, Yeh Dosti). According to me, the most iconic song from the film was "Yeh Dosti" and it became an anthem for friendship and fun. Though the sequence features 3 wheels and not 2, this just had to be part of the list. The brilliant camaraderie between the two leads is so well depicted and the lyrics are the backbone of the song. It sets-up the film so beautifully because the pivot around which the film revolves is Jai & Veeru's friendship. This song showcases that like no other.

This is one of the all time classics and one of my favourite films. This is the film that put Amol Palekar on the map and he went on to play similar subdued, mousy characters in several other films. A scooter and a motorcycle play pivotal roles in the film as Amol Palekar's character Arun thinks of buying a scooter to impress a girl that he likes. What follows is a series of comic events and the legendary Ashok Kumar playing Colonel Julius Nagendranath Wilfred Singh coming to Arun's rescue.

Amitabh was at the peak of his career and looked dashing in the song sequence. The entire album was super hit, but if there was one song from the film, whose imagery became iconic, it is this one. To me, Amitabh was a superhero, right in the league of Superman & He-Man. So I just could not fathom how Amitabh can actually die in a film. Naturally, I was not a fan of this film during my early days of growing up.

This is the film that gave Bollywood one of its first bike gangs. It also gave Jackie Shroff his big break and was the start of his everlasting association with Subhash Ghai. The film was a huge success and motorcycle was at the heart of it. There is something of Bollywood and songs on bikes, there was one here as well, this one having 5-6 bikes called "Ding Dong". One of the highlights was a World Motorcycle Race sequence from Mumbai to Panvel featuring 21 motorcyclists. Today, it may not seem like a big deal but back then, I had never seen anything like it.

This film features one of the most iconic entry scenes ever in Hindi cinema. Ajay Devgan made his debut with this one and it was a very successful debut indeed. Some people may find this corny, but when this film was released, all anyone could talk about was this scene, featuring Ajay Devgan, doing a full split on two moving bikes. Oh what nostalgia! No Song here, and I am not complaining at all. Seeing how he danced on the flat floor later in the film, I cannot imagine him shaking a leg on a moving bike.

Deewana was superstar SRK's debut vehicle and he too enters the film on his bike. His entry is in the second half of the film and it is with a song. Koi na Koi Chahiye became a popular song, and the film was a box office success, launching SRK's career

The film needs no introduction even though it was an average performer at the box office. Today, it has become a rage garnering a strong cult following. It is safe to say that this is one of the funniest films with the highest possible repeat value, right up there with classics like Golmaal and Chupke Chupke. The scene that gets this film in this list is the one where our beloved Amar & Prem go to get Uncle released on a moped. The scene ends with one of the most hilarious sequences ever. Amar, Prem and uncle/Teja (mark kidhar hai?) try to fit onto the moped and Prem suggests that Uncle should sit in his lap (godi mein aayiye na uncle, godi mein).

As a kid, since the time I saw Terminator 2, Harley became a name synonymous with motorcycles. And this was not just me, it was a generation of Indian kids who were in awe of the beautiful machine Arnold Schwarzenegger was riding. The film that gave Indians a new motorcycle (Suzuki Hayabusa) to talk about was Dhoom. John Abraham and his gang of cool thieves rob...ehh...banks, I think? and run away on these super cool machines. Even though this was John's 5th film, I am sure he wishes it was his first. Superbikes, robbery, thrill of bike chases with NOS Boosters, and one heck of a background score. What's not to love?

A modern masterpiece just like Raj Kumar Hirani's previous 2 films. 3 Idiots was a surprising film because no one expected Aamir, Madhavan and Sharman to pull off the act of under-grads well enough. The writing was again the hero of the film and one of the most special scenes features Pia's (Kareena Kapoor) scooter, with Pia, Rancho (Aamir) and Mr. Rastogi (Sharman's father) rushing through traffic to reach the hospital. The same visual is repeated as a fantasy call-back and it is hilarious.

Rishi Kapoor is a fabulous actor and this film is a testament to that fact. It is one of my all time favourite films and gave Rishi Kapoor a Filmfare Critics Award for Best Actor. The film revolves around a typical middle class family and their dream to upgrade from a scooter and buy a car. The scooter is featured repeatedly and is part of the pivotal plot change as well. The whole journey of upgrading from a scooter creates some priceless moments and is a complete family entertainer.

ZNMD will surely go down in history as one of the most well written and naturally performed films. The scene that gets the film to feature here is obvious....Laila (Katrina Kaif) on a Royal Enfield Classic riding on the highway to stop Arjun (Hrithik Roshan) from getting away. This scene is a huge moment in the film and sharpens the characters of Laila and Arjun and gives him the balance he needs for the rest of the film. Natasha (Kalki) who is pissed when she sits in the car, has a change of mood right after this as she now feels safe about Laila.

The latest film to make it to this list. Everyone remembers this film for Rajkummar Rao as he completely stole the show as Pritam Vidrohi. A motorcycle is featured regularly but it gets highlighted in 1 particular sequence. It is during Pritam Vidrohi's transfomration during the song Badass Babuaa. He parks the bike in the middle of a busy street and gets off to get pan. Cars honk and he turns, gives them a cold threating look, gets on the bike and rides off. This was fabulously written and performed perfectly.

Have I missed any of your personal favourites? Do leave comments or mail me to let me know.