It hurts me a great deal to say this but Mani sir has got it all wrong this time. After gems like Roja, Bombay, Yuva and Guru, Raavan is a half baked, badly scripted film which feels forced because there is no feel or flow in it. The story is based on Ramayana and is an attempt to make people see Raavan’s side of the epic saga. Raavan aka Beera (Abhishek) kidnaps Ragini (Aishwarya) to take revenge from Dev (Vikram) for being responsible of Beera’s sister’s death. I don’t think there is any need to give details into the story because, well, there are none. It’s too simple a story which runs on a single track, at the same pace towards an ending which we are all too familiar with. ...

Out of all the feelings people have in the world, love is definitely the most unpredictable. Ishqiya also follows the path of love rather unpredictably.  It starts off with Vidya lying on the bed humming ‘Ab mujhe koi’ sung beautifully by Rekha Bhardwaj, the camera pans to her face and at that very moment  you know you are watching something special. ...

Anurag Kashyap is indeed a special story teller. Even before the high praise from everywhere for Dev D could end he is back and how? Even this time the size of the canvas is same but how Anurag paints this one is very different from Dev D.The movie is a political drama based in the University where students take elections so seriously as if they were already in the Lok Sabha. ... 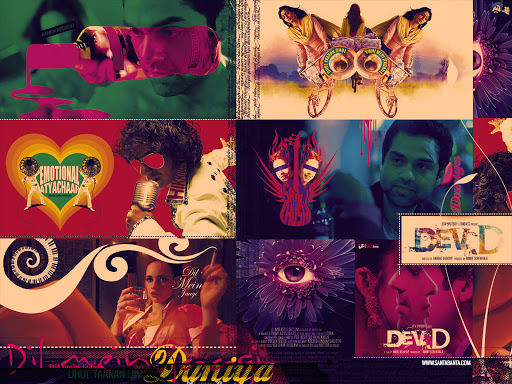 Its not often that one comes across a cult film, one that becomes a benchmark for filmmakers for years to come. But the funny thing about such movies is that they very rarely appeal to the masses. Dev D is one such film in which a lot of people just could not stand and others fell in love with it,  including me. It is just a question of whether the sensibilities of such a film hits the right spot in your mind or not. ...

I don’t wanna get into the habit of pulling down the expectation of everyone but i don’t even wanna praise something just because its got an Oscar nomination. Having said that Slumdog by no means is a bad film. In fact its a superb film, one that takes you on a ride which is fast, crisp and exhilarating. The cast is fantastic specially the small kid who plays Jamal(junior most) along with Dev Patel and Anil Kapoor who plays the two faced host with perfection. Even the others like Irfaan Khan and Saurabh Shukla fit in very well. Also there are some scenes that will stay with you forever like the young Jamal running covered in shit to take the Big B’s autograph or the eye popping beggar scene followed by a heart wrenching chase.

However the most fantastic thing about the move is its screenplay which moves between present and past with such ease and purpose. Simon Beaufoy surely deserves the Oscar nomination and so does Chris Dickens the editor of the film for such sharp work.

Also if there is something else that is Oscar worthy it is the score by A.R. Rahman which complements the happenings of the movie phenomenally well, be it O…. Saya, Paper Planes or even Jai Ho. Its funky, peppy and  very apt. A special mention for the brilliant cinematography (Oscar nominated) by Anthony Dod Mantle who captures the slum streets and brothels with utmost honesty.

So now the big question, Oscar? No. Not now, not ever. The only reason that it has reached such heights is because apart from being a good film it is directed by Danny Boyle and not Ashutosh Gowarikar or Rakesh Om Praksah Mehra. I see no reason why Slumdog can be nominated and Taare Zameen Par, Rang De Basanti and Lage Raho… can’t be.

One very important point. There is a scene where a driver beats up Jamal Junior for stealing something and Jamal tells the American couple that this is what real India is, and the American Couple say ” We will show you what real America is like” and hand over some cash. What does Danny want to prove here? That we Indians only know how to beat up and don’t have feelings? Or that Americans are so better of than Indians when it comes to forgiving someone? I really don’t know but i sure would like to ask him that.