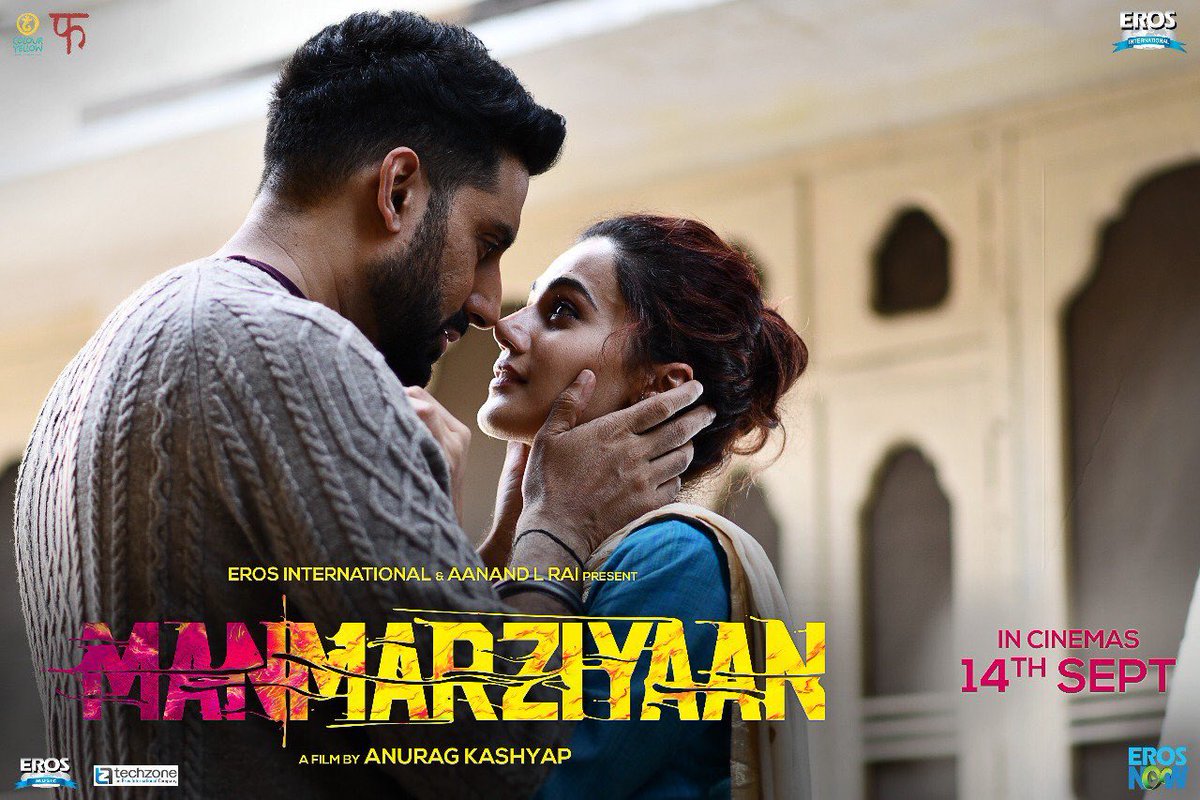 Manmarziyaan continues Anurag Kashyap's 2.0 journey into mainstream Hindi cinema. Though he had a forgettable start to it with Bombay Velvet, I remained optimistic. To be fair, Bombay Velvet was still very much in Kashyap's domain. There was a retro setting, underworld and struggle for power. Those are all the things, Kashyap excels in. When he was not able to deliver a good film with that setting, many would have doubted Kashyap's multi-dimensional ability. However, this time he is experimenting with a completely new genre and seems in a good enough form to prove his point.

Manmarziyaan starts off beautifully with the soft ballad 'Grey Wala Shade' playing in the background. Vicky (Vicky Kaushal) is jumping rooftops one after the other to meet Rumi (Tapsee Pannu) and have a Fyaar session. The film wastes no time in setting up the premise and pulls the audience in straight away. This is a big plus. As the film moves forward, we get to see different layers of Vicky and Rumi. Robbie (Abhishek Bachchan) enters soon enough and completes the triangle. Mind you, this is not a typical love triangle. It is, after all, an Anurag Kashyap film so there is plenty of new age treatment. Anurag plays with colour in a way that he has never done before, putting up some breathtaking frames. This is by far the most bright, happy and colourful Kashyap film you will ever see. As with most Anurag Kashyap films, the art direction is top notch. Each outdoor location, every indoor scene, and even small props add flavour to bring alive Amritsar in front of you.

All 3 main characters are etched out brilliantly and this is one of the big strengths of the film.

Add to that, the portrayal by all three actors is also top notch. Tapsee plays Rumi with so much conviction, mixing brashness with subtle oomph, and confusion with oodles of self-confidence. Rumi epitomizes the girl of today. Her love interest, Vicky, is a hardcore brat who is ambitionless. He loves to dream but does not want to put in the effort to make that dream a reality. Vicky Kaushal breathes life into the character that it is hard to believe that this man is anyone but DJ Saandzz (Vicky's DJ name). Kaushal and Pannu exhibit electrifying chemistry and you will not be able to take your eyes off them even if you wanted to. Robbie is the copybook good man and the role-model good husband. He is calm, mature, understanding and has a good heart. Abhishek puts an earnest performance and is successful in making you feel sorry for him. He gets one scene where he can let go (where he is heartbroken). His broken heart coupled with Tapsee's shock and fear create magic on screen. Vicky, Rumi and Robbie are complex yet relatable and hence extremely enjoyable to watch.

However, the thing I enjoyed the most in the film was Amit Trivedi's soundtrack.

This man has pulled another rabbit out of the hat, and with him, when things work, they work gorgeously. Hence, the entire album is splendid and carries the film on its shoulders. His eclectic beats mixed with Punjabi folk fits hand in glove with the setting of the film. Songs give depth to characters as well as the narrative ranging from the soulful 'Dariya' to the haunting 'Halla'. You will surely play the album on repeat once you come out of the theatres and like most Amit Trivedi albums, it will stay fresh for a very long time.

You would think that with Anurag's new age view of relationships coupled with sparkling characters and kickass music, Manmarziyaan would be a complete winner. Unfortunately, that is not the case. What lets the film down is the writing by Kanika Dhillon. Even though it has freshness in its essence, it lacks depth. The first half has so much going on that when the intermission comes, you are left wondering what is left for us to see. Not much else, as it turns out. Hence, the second half has so much of back and forth that at one point I was like 'Yes, I understand the characters are confused but can we skip ahead now'. It also does not help that the film has just one track. There was a definite possibility of adding some backstory via flashbacks to each of the characters or maybe have a parallel track for a career (DJ, Hockey, Bank) and situations, coming up from that. There is none of that, hence, the screenplay (Kanika Dhillon) too feels lethargic in the second half. This, unfortunately, means that the film is unable to end on a high. Knowing Kashyap and his love for haunting and resonating final scenes from his earlier films, this would be a letdown.

Manmarziyaan is not an exceptional film. Even then, Tapsee as Rumi and Vicky Kaushal as Vicky are exceptional. So is Amit Trivedi's exquisite soundtrack. So watch it for some memorable performances from the actors and a very gifted music director.

Also, watch it for Anurag Kashyap. Even though this is far from his best work, it is proof enough that this man can create beauty in any scenario, any setting and any genre. Whether it is streets of Dhanbad crawling with coal mafia, or the rooftops of Amritsar bustling with young love.