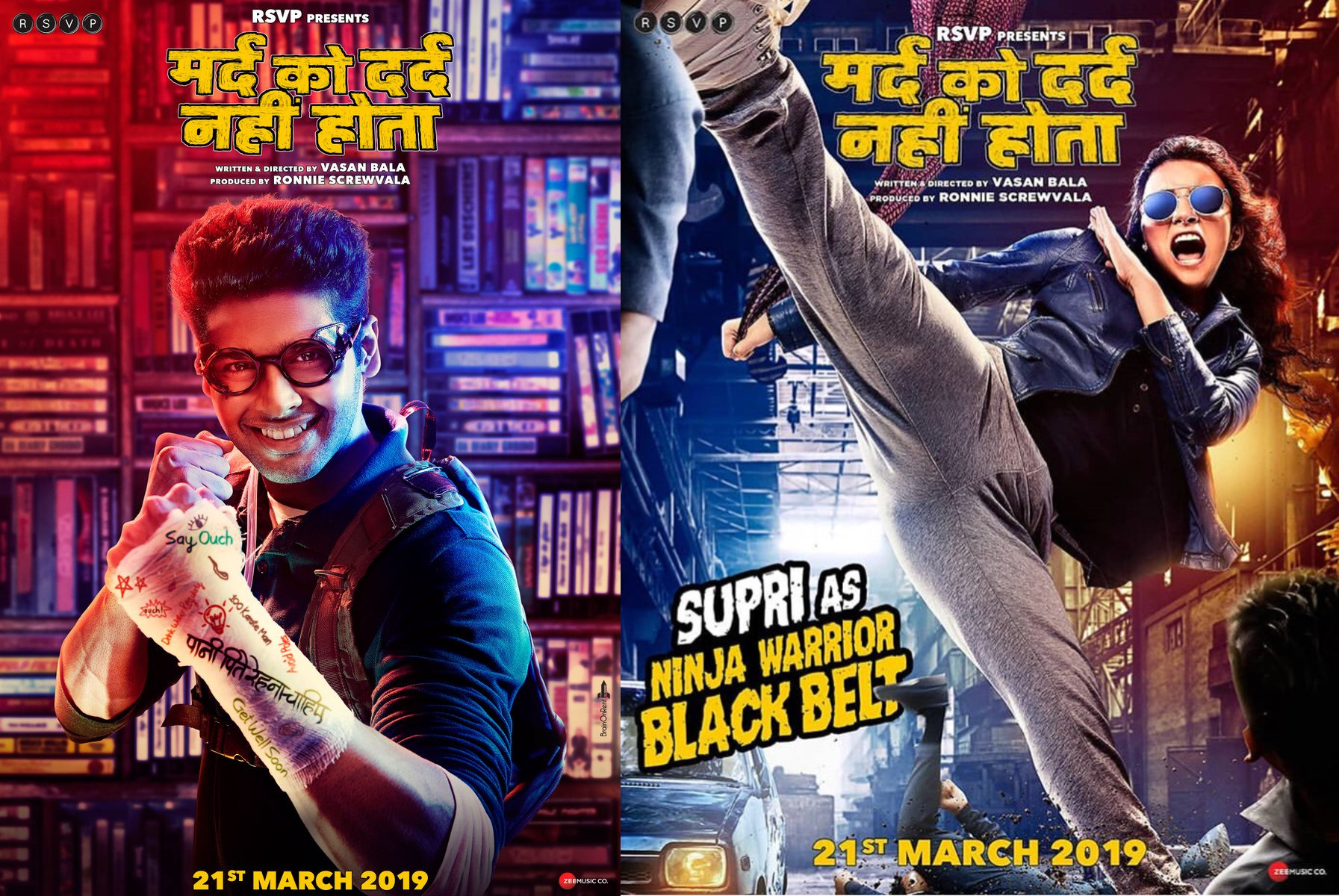 Mard Ko Dard Nahi Hota (MKDNH), written and directed by Vasan Bala is an unusual Hindi film. That's because it is really difficult to classify it into a specific category. It is an action dramedy but it is also a satire and above all, a love letter to the whole action genre of the '70s & '80s, especially martial arts films. Much to its credit, the references in the film stretch far beyond the '80s and Bollywood. There are elements that celebrate legends like Bruce Lee and Jackie Chan apart from multiple shoutouts to genre-defining films like Drunken Master, Big Trouble in Little China, Rocky and many more.

The film starts with a flashback sequence, which is 90percent of the film. A couple bringing their newborn son home meet with a tragic road accident in a chain snatching gone wrong. The Mother dies on the spot and we get to know that the baby has some rare disease because of which he cannot feel pain. Thus, the title of the film. The boy (Surya) has a difficult childhood, torn between his over-protective father's rules and his friendly grandfather's teachings.

Jimit Trivedi (Bhool Bhulayia, 102 Not Out) plays the father and Mahesh Manjrekar essays the role of the grandfather, Ajoba. The one thing Ajoba wants to ensure is that Surya understands the meaning of pain. To do this, he gets Surya to watch a lot of action films. The scene where Ajoba teaches him to say ouch is hilarious and so is every scene where Surya applies this in the real world. The chemistry between Ajoba and Surya is adorable and Mahesh Manjrekar puts in a fantastic performance. In one scene Ajoba tells Surya, “Life main abhi Bruce Lee se bhi zyada zaroori hai Sahe-Lee”.

Surya grows up confined to his house by his father. All he has with him are these action films on VHS and the drive to apprehend all chain snatchers one day. He watches these films all night and trains in the dark, hidden from his father. So even when Surya is all grown up, what we see is this man child who has no idea about the real world. For him, the world is what he has seen in films like Geraftaar. This makes for a few extremely funny moments as Surya enters the real world. Abhimanyu Dassani plays Surya with a boyish, naive charm which was exactly what was needed. His performance during action scenes is superb and sets somewhat of a benchmark for others to follow.

Radhika Madan plays Surya's childhood friend Supri. She is phenomenal and puts in the best action ever done by a female in Indian cinema. She owns the character completely, be it the ass-kicking black belt side or the selfless daughter, trying to manage her parent's medical conditions. Her intro scene is one of the finest cinematic experiences for me. Vasan Bala refuses to use heavy, bombastic sounds to enhance the action. In contrast, for the intro scene of Supri, we see this badass, female karate black belt, single-handedly taking apart 6 guys, all to the tune of Nakhrewali by Kishore Kumar. The slow-motion is done exceedingly well and is helped along by some sharp edit cuts which keep the action very engaging.

While watching his numerous VHS tapes, Surya comes across a real video of Karate Mani, a one-legged man who defeats 100 men in ‘Kumite’ (freestyle fighting). In that instant, Surya knows he wants to be like this man. He coincidently meets Karate Mani and addresses him as Shifu, a shoutout to KungFu Panda. Surya gets embroiled in his ‘Shifu’s’ mess with his evil twin brother, Jimmy. Gulshan Devaiah (Dum Maaro Dum, Shaitan, Hunterrr) plays Karate Mani and Jimmy like a dream. You see two characters and I promise, you will see two different people portraying the role. Yes, the makeup and costume make a difference but it is the body language and the finesse that Gulshan brings in that makes the difference. Some of the best dialogues are delivered by him and feel almost like improv. My favourite one is Jimmy telling Supri “uthne ki kya zaroorat hai, raise he let ke dekh le na fight”

The action sequences are fantastically shot and choreographed. I know that Vidyut Jammwal and Tiger Shroff have made slick action their thing. But I loved this so much more because it felt so real and personal. And there is a lot of it too see, I mean it. Some may get exhausted watching the action as the pre-climax sequence does stretch a tad bit. The climax, however, is perfect in every way. It is funny, quirky and slick. The innocent question Surya asks himself when he sees a hoard of bad-guys running towards him is golden.

The highlight of the film is the quirkiness and it all comes together in the climax. Vasan cleverly names the final fight ‘Vidya Bhawan Royal Rumble’ with colourful bright font plastered on the screen, an ode to WWE and fighting video games. Even throughout the film, you hear things like Sasta Shehensha, Matunga ka Feroz Khan, Hit Girl (Kickass) kahan hai, Main hoon Jatin Stark (Iron Man), Ab yeh Mowgli tumhe Bagheera bulayega kya (Jungle Book). In fact, the song Rappan Rappi Rap is a musical homage to pop culture elements like Pacman, Back To the Future, Star Wars. I had such a fabulous time spotting these and they saved the best one for the end. As the film is ending, there is a voice over by Surya (supposedly included in the last edit) which goes something like this “Meri ladai ke liye koi khushi ke aansoon nahi bahayega, koi national anthem nahi gayega, agar woh dekhna hai toh saath wale screen pe jaana padhega'. A clear cut reference to Akshay Kumar's Kesari playing in almost every other screen.

Mard Ko Dard Nahi Hota is not a perfect film. It is a little longer than it should be and it tries to be a little too smart at times. In spite of that, I loved every bit of it. It was thoroughly entertaining and a treat to watch. It is a shame that issues between UTV and multiplexes have had an effect on the release of this film. If this would have been released directly on a streaming service like Netflix, more people would have seen it and appreciated it. Now, I am not sure how many will watch it on streaming, once it gets a tag of a 'flop' on it.