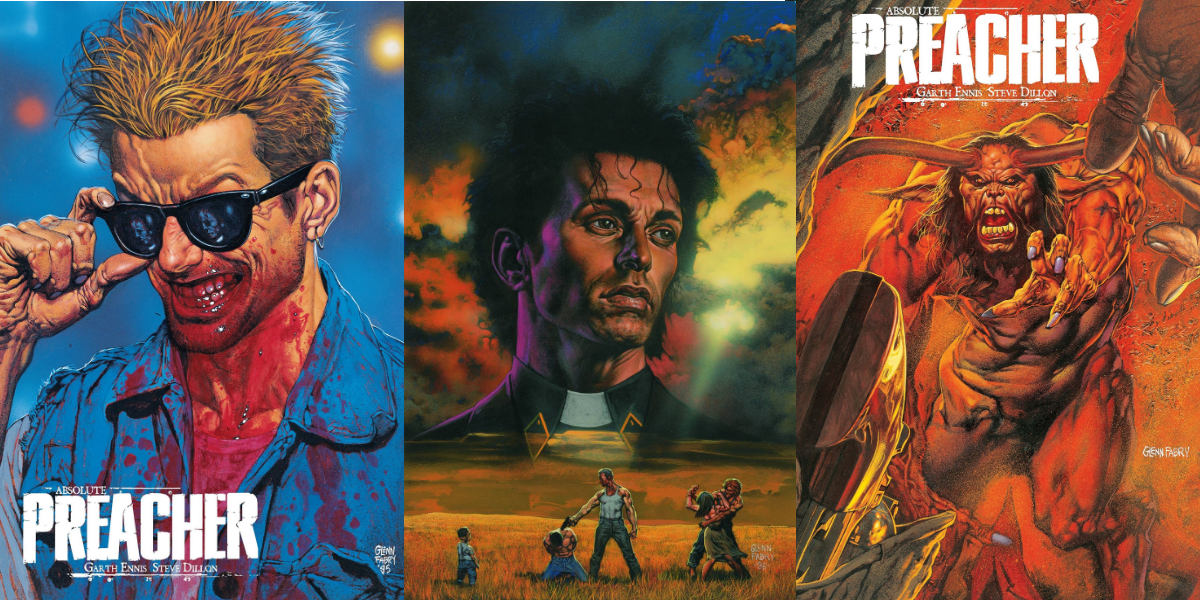 If you have a low bar for violence, you should not read Preacher. If you are easily disgusted by graphic details, please do not read Preacher. If profanity makes you uncomfortable, stay away from Preacher.  Last, and not the least, If you are religious, do not dare to read Preacher. If, by chance, the answer to all these is 'No', consider yourself extremely lucky because you will have the time of your life reading this brilliant comic series published by Vertigo. To me the audacity of Preacher is phenomenal. Amazingly, Vertigo was able to get this published, because today, it looks even less likely, with the ever-shrinking tolerance levels of people all around.

Preacher series was created by writer Garth Ennis and Steve Dillion, with jaw-dropping painted covers by Glen Fabry. The series consists of 75 issues published between 1995 and 2000 and tells the story of a hard-core Texan, Jesse Custer. He is a Preacher in a small town called Annville but in his heart, he is a cowboy. The story starts with Custer getting possessed by a supernatural entity called Genesis.

In the process, Custer's entire congregation is killed and his church is destroyed. Something changes in Custer from that point on (no spoilers) and he decides to find God to question him on the deplorable state of the human civilization. On this journey, he is accompanied by his ex-girlfriend, Tulip O'Hare. Early on in this crusade, they pick up an emotionally hollow and border-line alcoholic Irish man named Cassidy. The three of them are the central characters in the series form the crux of the story.

The strength of Preacher is in its characters. The central characters are fantastic with Custer and Cassidy being the Hall of Famers. Custer is a badass. He wants to stand up for what is right and will go to any length for it. He has strong morals and is quick to pounce on anyone who goes against them. However, he knows when to show restraint, unlike Cassidy. His altercations with Arseface and Hoover are a testament to that fact. Cassidy is short-tempered, perpetually under the influence of alcohol and has a cool don't-give-a-damn vibe about him. However, you can tell that there is something off about him. This air of mystery brings a sense of discomfort more than intrigue that one may suspect. If there was one thing I disliked in both Custer and Cassidy, was the fact that they were both chauvinists. I guess it stems from the time and the place where the story is set.

Tulip's character is also atypical, just like everything else in Preacher. She is no damsel in distress. On the contrary, she is more than a handful with a gun and she can take on a platoon of trained guards. She can also surprise you by kicking you between the legs if you act like a jerk. Tulip's character brings the required balance to the narrative and it is a huge reason for the love story to work.

It can be expected that the main characters will be well-etched and strong. But in Preacher, I was surprised by the strength of the support characters. Saint of Killers, Herr Starr and Arseface are truly memorable. Saint of Killers is horrifying and scary. Arseface and Herr Starr are perfect examples of dark humour, even if Starr was slightly better, combining dark humour with relentless ferocity. Each of these characters is crafted with precision and every single one of them gets a detailed backstory. This brings so much depth to them and helps you understand their triggers and anchors.

The pace of Preacher is fast and the fabulous artwork makes it extremely edgy and tense. There are certain panels and moments that I cannot get over. The tension is broken, often at unexpected times, by its trademark humour. It is dark, bordering on uncomfortable, but I found it to be hilarious throughout. There are multiple instances of graphic violence and sex, hence, Preacher is not for the faint-hearted. The content itself is disturbing and the artwork supports that by going the distance and making you cringe. Even though this may scare off a lot of people, if you go ahead and read it, you can be assured that there is never be a dull moment in Preacher. Not one, in the entire length of 2,000 odd pages.

The series is a benchmark for adult comic books as it successfully mixes a no. of genres, from supernatural and horror to action and fantasy. It is no surprise that Preacher has had such a widespread cultural impact. Stephen King was influenced by it when he created his Dark Tower comic series. In another landmark comic series, Y: The Last Man comic series there are consistent references including a major plot twist thanks to the famous cigarette lighter. Add to all this, a successful and critically acclaimed AMC TV series adapted from the Preacher comics. Now that I am done reading, I will make it a point to watch the series as well. Hopefully, the show will help to go through the bizarre, hilarious and shocking experience of reading Preacher all over again.