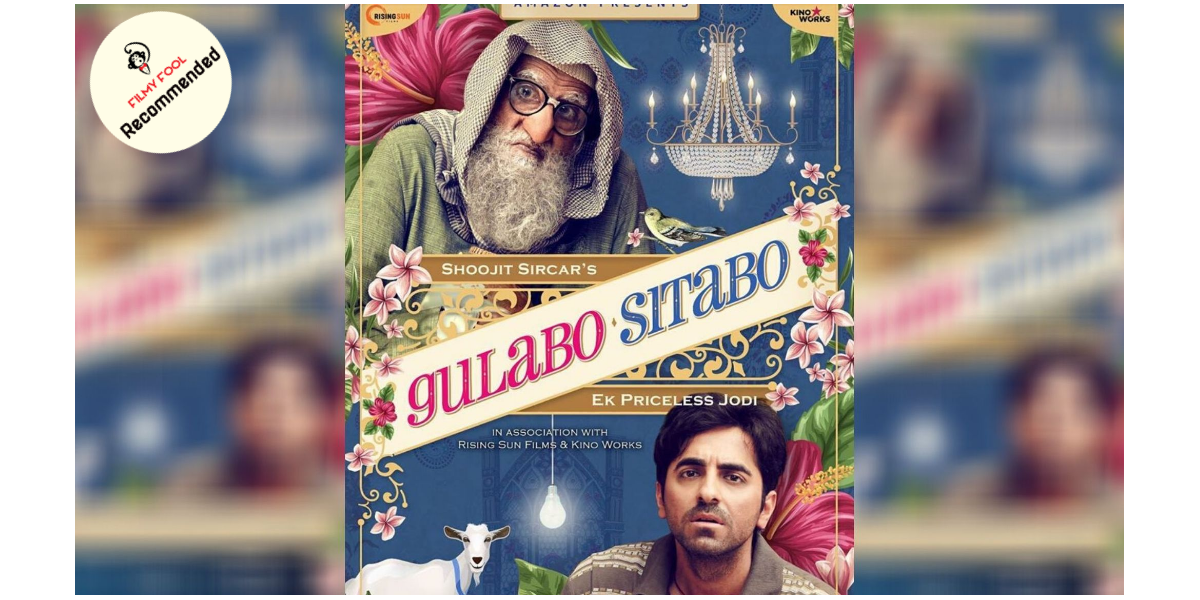 Gulabo Sitabo, directed by Shoojit Sircar and written by Juhi Chaturvedi had become a landmark film even before its release. That's because it was the first big Bollywood film that had decided to release via online streaming on Amazon Prime Video. So for the first time in my life, I sat down with my family and enjoyed a movie premiere, from the comfort of my home. In case anyone is wondering, let me tell you, Gulabo Sitabo is as enjoyable from the cosy corner of your home, as it would be on the big screen.

The film stars Amitabh Bachchan as Mirza and Ayushman Khurana as Baanke along with Farrukh Jafar, Vijay Raaz and Brijender Kala. The story revolves around a heritage property, a dilapidated ‘haveli’ called Fatima Mahal, where Baanke is a tenant living with his mother and three sisters. His landlord on paper is Fatima Begum aka Fatto, wife of Mirza. She is old and mostly bed-ridden so the onus of ‘behaving’ like the landlord falls on Mirza, who is all too happy to play the part.

Juhi has a knack for writing truly memorable characters. In Gulabo Sitabo, she once again creates fantastic characters that will be etched in my memory for years to come. Mirza is a selfish miser and also a gold digger, who is only counting the days until Begum kicks the bucket. His personality reminded me of Uncle Scrooge from Ducktales, minus the building full of money. Baanke is a difficult tenant who always manages to squiggle out of paying the rent. Sometimes with an excuse, other times with trickery. The banter between Mirza and Baanke is at the heart of this film and it is thoroughly entertaining. Their altercations are full of mischief, and madness. All to get back at each other for the previous misdeed. It reminded me so much of Tom and Jerry and just like my childhood, these two left me with a big smile. The beauty of such relationships is how comfortable you have become with each other’s quips, to the extent that you have become dependent on them. Tom would not know what to do in his life if Jerry was not around. Mirza and Baanke seemed to share the same energy between them.

No matter the calibre of the actors portraying them or the high level of detailing in writing them, a film is never left to the lead characters when Juhi and Shoojit are at the helm. In most of their films, supporting characters are not filling up a frame, nor are they included for the sake of their names. Each one has a purpose, from Dr Chaddha (Anu Kapoor) and Biji (Kamlesh Gill) in Vicky Donor to Chhobi Maasi (Moushumi Chatterjee) in Piku. In Gulabo Sitabo, Gyanesh Shukla (Vijay Raaz), Christopher (Brijendra Kala) and Fatima Begum (Farrukh Jafar) leave their stamp in every scene and make it their own. Although, it is Guddo (Srishti Srivastava), Ayushman’s firebrand sister, who leaves the deepest footprints. She made her presence felt in a single scene against Alia Bhatt in Gully Boy. Here she gets to do a lot more and owns every scene she is in.

The production design by Mansi Mehta and art direction by Pradip Jadhav are things of beauty in Gulabo Sitabo. Every nook & corner, every crack, every chip of paint falling off, all of it is perfect. All these things come alive and compliment the narrative when seen through the lens of Cinematographer Avik Mukhopadhyay. The rooms of the tenants look claustrophobic and unused spaces seem dark and distant. Dialogues by Juhi Chaturvedi are effortless, flowing and natural while the Humour is quirky, clever and subtle. All of it fits perfectly into the overall setting of Lucknow.  Lucknow is known for its ‘Pehle Aap, Pehle Aap’ culture, and the film beautifully makes space for itself within that culture. The background score by Shantanu Moitra does a fabulous job of getting the audience in-sync with the intended pace. Every time you get a hint of a change of pace, the Clarinet theme pulls everything back to where it needs to be. The only small issue I had with the film was how it closes the arc of Begum. The final scene of Begum should have put a lot of things in perspective, but it just felt incomplete.

There is a lot that I loved in Gulabo Sitabo but above everything else was Mr Bachchan. His body language and mannerisms are pitch-perfect, accentuated several notches thanks to the ingenious make-up by Christien Tinsley and Dominie Till. These things come together in a way that completely engulfs the Amitabh Bachchan that we know and adore. All that remains is the hunchbacked, wrinkly, scrooge-like, Mirza. The fact that even today, after being in the industry for over 50 years, Mr Bachchan can come out and give a monumental performance is unbelievable. He has shown the willingness and the industry has lapped it up by writing roles specifically tailored to his mammoth talent.

Despite the fun and the cat and mouse chase, Gulabo Sitabo ends in a melancholic and sombre manner. There is Ice cold loneliness in seeing Mirza dragging the chair, or walking back with a solitary balloon. Another takeaway for me was the fact that Mirza never truly understood the value of things he had because he was always after the one thing that eluded him. The chair is something that symbolised that and could be why Sircar has it featured in the final frame of the film.