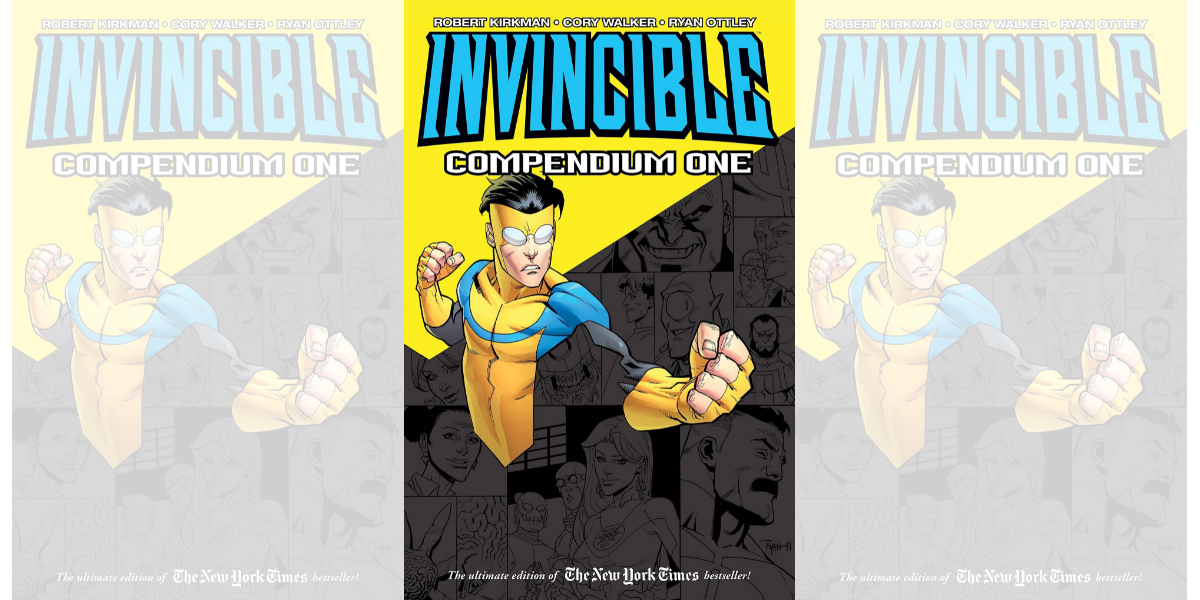 Invincible is a superhero comic series that has a slightly different take on the genre. The series consists of a mammoth 144 issues, running for over 15 years, from 2003 to 2018. Compendium 1 (featured in this post) covers issues 1 to 47. It is the coming of age story of teenager Mark Grayson who uses the alter ego 'Invincible' to fight crime. He is the son of Omni-Man who is not from earth and is the most powerful man on the planet.

The highlight of Invincible is how the story gets grounded with reality. It talks about superheroes, aliens, and far-off planets. At the same time, it deals with issues of high school, grades and college admissions, and teenage romance. Hence, Invincible’s tone is casual and chilled out. When the level of violence starts to break new ground, there is a very subtle shift, and that too for a short while. The artwork plays a huge role in setting up this tone with a lot of bright colours. The action is exciting and brutal. The artwork in these scenes is phenomenal and jaw-dropping. So for some people, it will be difficult to get through.

Mark Grayson's character is very real and that keeps you invested in the main storyline. You are concerned for Mark's safety when he goes on a mission, and you want to shout at him for not pouring his heart out to the perfect girl. The writing does complete justice to Marks character and creates a very strong arc overall. I can't say the same about some of the other supporting characters because over there, the writing does seem a little erratic. Characters like Rex Splode, Black Samson, Dupli-Kate are weak and inconsistent in their behaviour. Additionally, very few characters get individual sub-plots that help develop their storyline. To be honest, it is a minor issue in an otherwise remarkable comic series.

Invincible compendium 1 is a fantastic read because it maintains a perfect balance between the hard-core and the mundane. It also brings out the humanity and vulnerability of superheroes who are always shown as unbeatable. Invincible provides a perfect get-away from the usual DC and Marvel comics. The trouble is getting your hands on a copy. The paperback edition is very difficult to find in Indian bookstores because each of the 3 compendiums costs around 4K INR. So there is hardly any stock. If you are really keen to read it, you can do what I did, read it on the Kindle App on a tablet. It does not offer the same feel of a comic but at least you get to read these amazing comics that don't find their way to Indian bookstores.

Support local bookstores. Buy your books here Use code: filmyfool and get an exclusive discount.