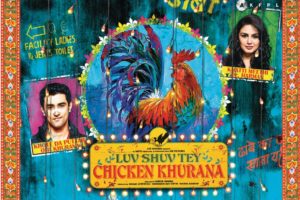 The last few years have offered a lot of quirky small budget films that hit the mark on most counts. Luv Shuv Tey Chicken Khurana falls in the same bracket of Khosla Ka Ghosla, Oye Lucky Lucky Oye in terms of flavor and treatment. The film is about Khurana family and centers around the recipe of Chicken dish that only Daarji (Vinod Nagpal) knew how to make. Omi (Kunal Kapoor), a runaway, returns home from London due to money problems and is looking to get easy cash. When he gets back he is welcomed by most members of the family without pondering over the way he ran away. He reconnects with Harman (Huma Qureshi), his childhood fling who is mad as hell since he never called in the last so many years. Whether he manages to get hold of the recipe for Chicken Khurana or not is a question best left unanswered.

A film is also like a dish but a much difficult one to perfect. Even stalwarts can sometimes add more salt or spices and it loses the flavor that people long for. Keeping the same thought, Luv Shuv gets every ingredient spot on just like Khosla and Oye Lucky. If there is any problem, it lies in the the right amount of ingredient which is also crucial. The cast of the film is pitch perfect, I cannot think of anyone else who could play the role of Daarji and Titu Mama better than Vinod Nagpal and Rajesh Sharma. The other supporting characters also fit their roles perfectly. Huma Qureshi who was praised for her debut performance in Gangs Of Wasseypur 1&2 shows her range and is so believable as Harman. She adds the much needed spark to the romantic track of the film. Kunal Kapoor is effective but not memorable. Music of the film is no less than any cast member, it is very much a member of the film and would really be incomplete without it. Amit Trivedi yet again composes a score which carries the film instead of a selection of songs that fill in the gaps.

The film offers many delightful moments, none more than the ‘Kachcha Scene‘ which is hilarious. Dialogues are humorous throughout and Titu Mama gets the best lines. Art direction & costume are perfect. So what is that one ingredient that is little less than perfect? The script. It is a little too simple to captivate the audience for the entire duration of the film. The supporting track of romance is good but apart from that there is nothing else to support the track of the mysterious recipe.

On the whole, Luc Shuv Tey Chicken Khurana is delicious enough and a dish which should be tasted by all cinema lovers, whether you are vegetarian or not. It boasts of a dream cast, ample humor and great music to keep you company without staring at your watch, maybe just a little glance.