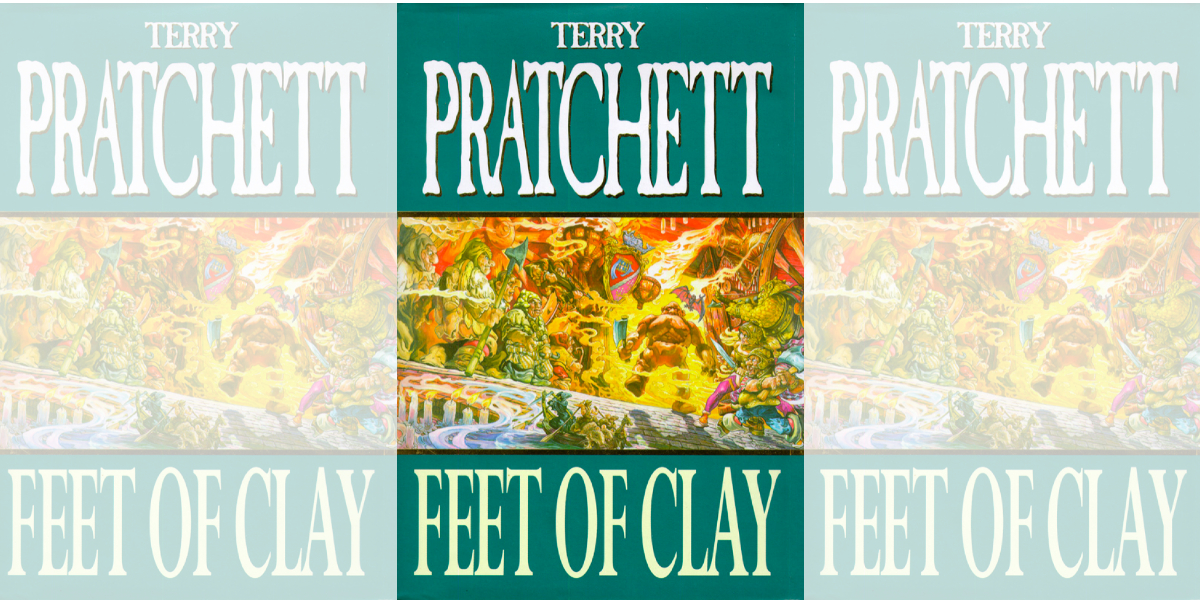 Book 3 in the City Watch arc, Feet of Clay continues the brilliant character work and offers the most enjoyable experience of Discworld (so far).

Terry Pratchett has set up fabulous characters in the first 2 outings of this storyline (Guards! Guards! and Men at Arms). He builds on these further in Feet of Clay, without compromising on the fun or the mystery. So you get to see another layer added to Vimes and Carrot. There is also an interesting undercurrent starting to develop between Carrot and Angua. Apart from the main characters, the support characters also get their time in the sun. Nobby and Colon both have a lot of story time and it is hilarious.

Pratchett also manages to introduce new characters that are delightful, adding a sense of intrigue to the narrative. Dorfl, the Golum, is one such character and the other is Cheery Littlebottom. Though, I think my favorite new character has to be Wee Mad Arthur, a gnome who brings an unexpected layer of spunk to the mix. I had a lot of fun reading his bits and especially his interactions with Colon. Overall, if there is one thing that’s common across most of these characters, it's chutzpah! Oodles of it.

In addition to the delightful characters and the hilarious writing, what I also love about Terry Pratchett is his ability to add social commentary in a nuanced manner, even when the narrative is loaded with buffoonery and chaos. He does it so effortlessly and beautifully. You don’t know it while you are reading a section, but all of a sudden, you start to correlate with the real world, and it all comes together.

Race has been a strong subject right through the previous books and feet of clay carries that too, albeit in a slightly understated manner. What gets more focus this time around is how society treats people who are differently abled or just away from the norm. There is also a bit on following your heart. We also see comments about gender roles and stereotypes. All these references are extremely subtle and at times, a stretch to connect. That’s because the core of Pratchett’s writing remains humor in a world full of interesting characters.

I enjoyed the first book and loved the second, but now, I am a fan. Sir Terry Pratchett truly deserves all the accolades without a doubt. For me, Feet of Clay is a benchmark in fantasy writing and one of my all-time favorite reads.