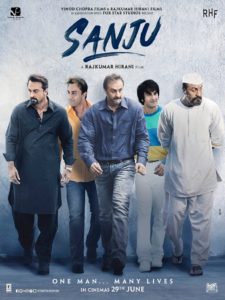 The first full trailer of Sanju was released today starring Ranbir Kapoor as Sanjay Dutt. It looks like Ranbir is living and breathing like Baba and Rajkumar Hirani may have just created another masterpiece. The trailer is intriguing and by the end of it, you will just want more. Sanju boasts of a stellar cast with Paresh Rawal as Sunil Dutt, Manisha Koirala as Nargis,Dia Mirza as Manyata Dutt, Sonam Kapoor, Vicky Kaushal, Jim Sarbh and Anushka Sharma. Phew! Its been a while since we have seen a cast like this. Really hope this is as good as we all expect it to be.