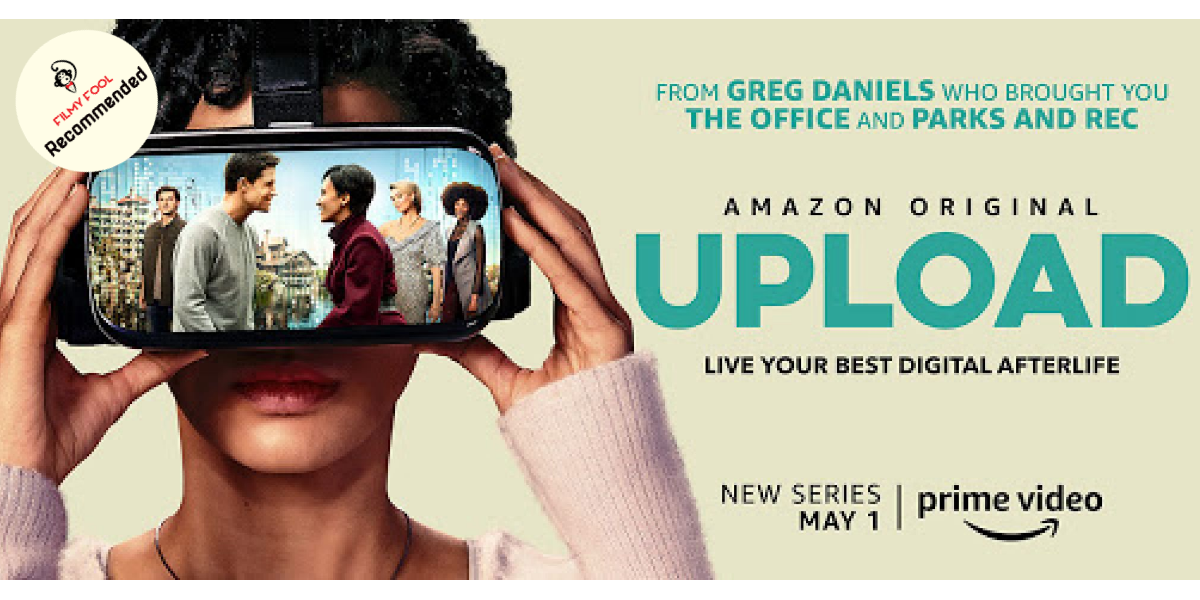 Upload is a new Amazon Original series starring Robbie Amell and Andy Allo. I would classify it as a sci-fi rom-com satire, and that makes it quite novel. I will be honest, I started the show because I was looking for a guilty pleasure. I am sure we all watch shows which we know are slightly stupid or obvious or just easy. I do it when I don’t want to indulge. At that time, I want to watch something easy and even pick up my phone to check a notification or two, without having to worry about what I have missed. Based on the trailer, I was confident that I have found it, but halfway through the first episode, I was so smitten that I did not want to look at my phone, even when it was ringing. Clearly, I was wrong, and as luck would have it, Upload turned out to be sheer serendipity.

Upload is based on the concept that in the future (the year 2033), mankind has the technology to transfer the consciousness into the virtual world, thus opening the doors to immortality. Various companies have created their own afterlife retreats, and are distinguished my facilities and price. People can make a choice to be uploaded to a certain retreat at the time of their death. The show is centred around Nathan (Robbie Amell) who meets with a road accident and is convinced to get uploaded by his girlfriend (Allegra Edwards). Once uploaded, Nathan initially finds it hard to adjust to the new virtual life and is helped by Nora (Andy Amell) who is a handler of sorts for the uploaded souls. As the audience, you are also experiencing the virtual afterlife for the first time alongside Nathan. There are many eye-popping moments and you almost feel like Alice, tumbling down the rabbit hole. It has enough there for your curiosity to get the better of you and you run to see how deep the rabbit hole goes. But don’t get fooled by the razzmatazz. The writers just use that to deceive (pun intended) you so that they can land a sucker punch. That’s because Upload is genuine, heartwarming and thought-provoking.

The writing is simple and linear, so it should appeal to a wider audience. The writing is also clever enough to laugh at its preposterous premise. Additionally, it takes multiple digs at our digital lives and the blatant capitalism fuelling it. The storyline also incorporates a murder mystery track to make things more interesting. But Upload is one of those shows that camouflages itself so that its appearance does not scare you. It wants to come across as a casual romantic comedy. However, as it starts to unravel, it takes you deeper into its highly perceptive core. What does is it really mean to ‘Live’? how would you want to spend your afterlife? and the big one, do you want to live forever? Upload subtly throws these questions at you and you can't help but ponder over them.

The beauty of Upload is in 2 things. First is the way it showcases the eternal afterlife, haunted with loneliness. It is so chilling to see Nathan surrounded by so many souls and yet completely alone. To imagine living like this until eternity is just horrifying. The second thing is the delightful leads. Robbie and Andy are charming, beautiful, genuine and delightful. Upload succeeds because you are interested in their story, you feel suffocated when Nathan feels trapped, you feel agitated when Andy's boss behaves difficult and you smile like there is no tomorrow when they are sitting on a swing, talking about life.

In spite of the many positives, Upload also has its share of issues. The support characters are not well etched at all which means that you will more or less have a single track running through the entire season. Even though the show pulled through it in season 1, I really doubt a repeat in season 2 if the support characters are not given something substantial to do. The other issue I have with the show is the with the closing of the story arc of season 1 and in the last 2 episodes. During the last 2 episodes, the show feels extremely incoherent and out of character. The biggest downside of this is that the season does not end on a high and instead feels anticlimactic. That is sad considering how enjoyable the first 8 episodes were. Even then, Upload offers a unique premise, clever writing and fabulous leads. I'd say there is certainly enough there for you to have a good time watching season 1.