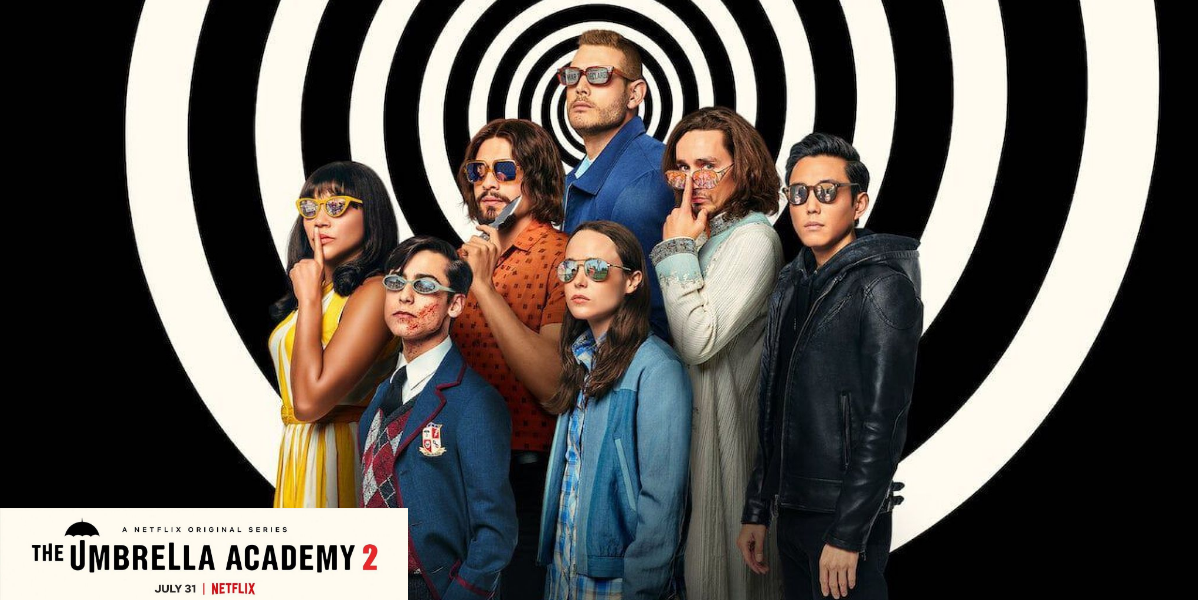 The superhero genre has exploded with many shows and films coming up in the last few years. So it is a huge challenge for any show/film in this genre to create its own space. Hence, The Umbrella Academy deserves big applause for doing it not once but twice.

Season 1 of The Umbrella Academy was a lot of fun. Season 2 continues in the same direction and takes things a notch or two higher.

The entire family is back and this time they are in the 1960s. The season starts off slow but gets into the groove within the first two episodes. Even though each episode is around 45 mins in length, you breeze through them without even realising. Simply put, Umbrella Academy Season 2 is one of the most binge-able seasons I have come across, for any show. The plot is interesting and keeps you hooked. One difference here is that the plot point is actually a major incident in history. This becomes the pivot around which the entire season revolves. The season ends as a tease just like season 1 so hopefully, Umbrella Academy will get renewed for a much deserved season 3 very soon.

The background score in season 2 is exceptional repeating the feat from the previous season. The music adds so much to the storytelling and lifts the experience a great deal. Whether it is the action sequences, emotional scenes or the ones that are downright wacky, the creators have an appropriate song for it. I have already downloaded the playlist and have been listening to it on repeat since I finished the season. The humour continues to be clever in the show and so are the action sequences. Though, I would have enjoyed a little more action.

The heart of the show are the characters and there is no one greater than Aidan Gallagher as number 5. He is a little kid in reality but he roams around like he owns the world. His body language and delivery are so fine that you actually see him as a mature, elderly character that he is portraying. Klaus (No. 4) played by Robert Sheehan is also delightful and comes second only due to the magnificent performance by Aidan. His screen presence is magnetic and you can’t keep your eyes off him. Emmy Raver-Lampman is fabulous as she shows immense depth in her portrayal of Allison or number 3. Justin Min as Ben or number six also brings in a lot of balance with his restrained and heartfelt performance.

Ellen Page is a star. She is a spectacular actress and maybe the role of Vanya or number 7 does not do justice to her talent. Nevertheless, Ellen comes in with her characteristic innocence and turns it around on cue creating a fire & ice kind of a situation. It is wonderful to watch. Unfortunately, Tom Hopper or number 1 does not get to do any heavy lifting in spite of his size (pun intended). He is undoubtedly charming in the comedy scenes but there is nothing much for him to do beyond that.

Season 2 of The Umbrella Academy reduces some of the baggage that pulled it down in season 1. The result is a season that is a whole lot of fun with the right amount of emotional quotient. If you are looking for a breezy little show with some fantastic characters, a great soundtrack and a bit of sci-fi action, look no further than The Umbrella Academy.

Umbrella Academy is streaming on Netflix. Watch it here.