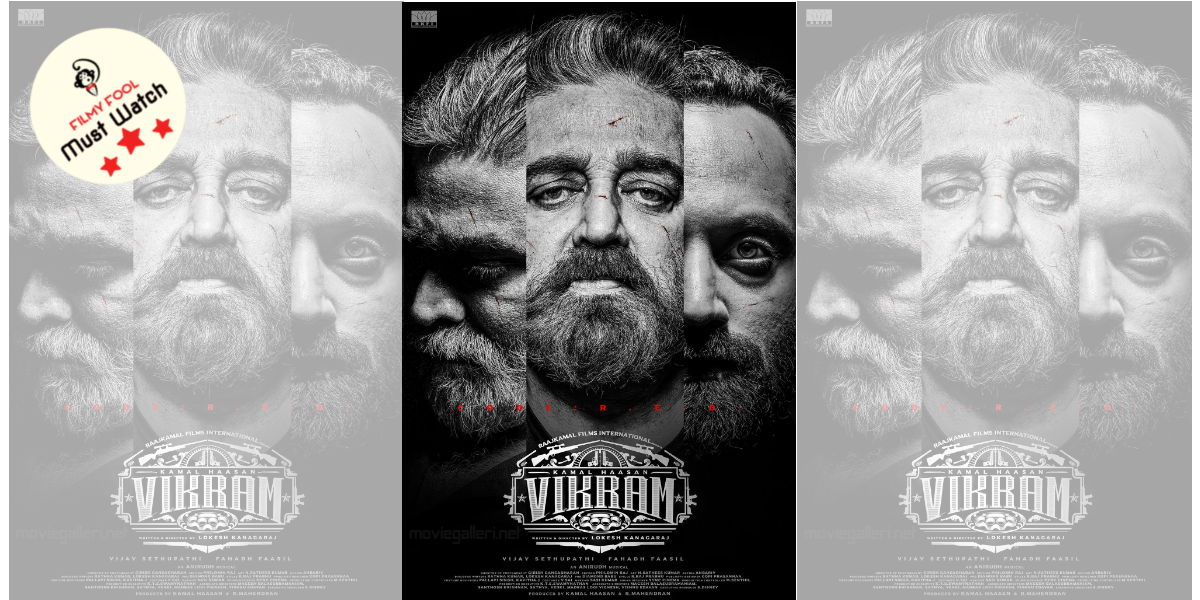 When you have a cast like Vikram, it is a double-edged sword. It has to carry the weight of expectations, do justice to the talent and on top of that, entertain. I am so pleased to say, Vikram does all of that, and does it with a lot of panache.

Vikram has 2 distinct identities across its two halves. The first is that of a sharp police procedural where a series of murders compels a special unit to start investigating. The narrative moves beautifully across the present and past, showcasing the creative vision of director Lokesh Kanagaraj. The transitions between Fahadh and Kamal Haasan are a thing of beauty. The story-telling during this phase is complex and kept me hooked. There is very little in Vikram that feels like a mass entertainer in the first half. All that changes as we enter the 2nd half.

The 2nd half brings out guns, gore and glory taking Vikram from a taut mystery to a vigilante saga. I did not complain because the shift is not at all jarring but meticulously weaved into the narrative. On top of that, the action sequences are expertly choreographed. The direction and cinematography elevate these scenes even further with slick transitions and poetic camera movement. One common thread that stays consistent across the two halves is the spell-binding background score. Anirudh Ravichander’s score can breathe life into the most mundane. So be it Vikram’s slow-burn mystery, grand entry of a key character or a big budget action sequence, the score adds another dimension, creating a long-lasting impact. Now, every time I hear the title sequence or once upon a time, I have goosebumps.

In a film with 3 stalwarts of the Film Industry, a high level of performance should be the bare minimum that one could expect. What Vikram does beautifully, is how it balances the screen time of its three big stars. The writing gives each of them ample time to shine and Lokesh manages to shift focus from one to the other so seamlessly like an Olympic relay team passing batons. The movement is seen, but it is fluid, precise and swift. So much is happening but it all feels natural, never jarring. This for me was one of the biggest highlights of Vikram.

While technically the film is splendid, it is the actors who are the backbone of all of this. Fahadh firmly establishes himself as one of the most versatile actors in modern Indian cinema. The swings he achieves in his demeanour just by his eyes and body language are extraordinary. If Fahadh is somewhat understated, Vijay Sethupathi is supremely larger than life. From his sparkling golden teeth to his tattoos, and finally, his dark side. Everything is big, bad and beautiful. The last and most magnificent is the man himself. Kamal Haasan is fantastic, mixing ruthlessness with his natural charm. His scenes are expertly shot and fights are set up very intelligently. He is a total legend and Vikram showcases his range beautifully, elevating his star status even further (if that is at all possible).

Storytelling, Acting, Direction, Cinematography, Action and Background Score. Vikram is a masterclass in all these. It is streaming on Disney+ Hotstar and is a Must Watch.