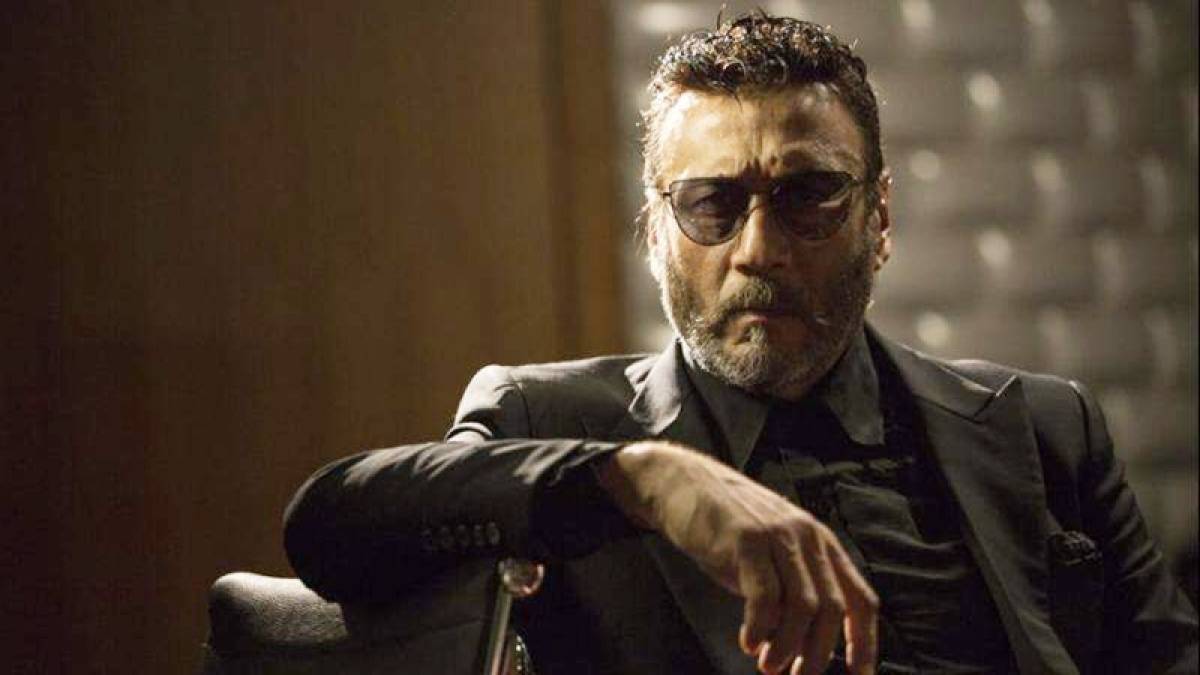 Jackie Shroff has always intrigued me. Since the first time I saw him in Ram Lakhan (1988), I was in awe of his unconventional demeanour and body language. His screen presence was so overpowering that one could not look at anyone else while he was in the frame. Jackie came from a modest background. Born as Jai Kishan Kakubhai Shroff, he left school and did odd jobs before getting spotted by an ad-agency executive. That started his journey into modelling and subsequently led to his debut film Swami Dada (1982) where he had an uncredited role. Jackie's big break came in 1983 with Subhash Ghai's Hero.

Soon after Hero, in the year 1984 came Andar Bahar and Yudh, where Jackie was paired with Anil Kapoor. This pairing became extremely successful and was repeated in big films like Karma (1986), Ram Lakhan (1988), and Parinda (1989). Another landmark film that kids from the 80s’ would remember well is Shiva Ka Insaaf (1985). It was a superhero film and touted as the first Hindi film to be shot in 3D. Jackie saw a lot of commercial success in the early years but the critical recognition came with Kaash (1987) and Parinda.  Directed by Vidhu Vinod Chopra, Parinda garnered cult status and was seen as a break-out film for Hindi cinema due to its realistic treatment, the depiction of the underworld, violence and noir-inspired cinematography. It also turned out to be a showcase of Jackie's talent as, before this, he had not done many big films as the main lead. Jackie went on to win the Best Actor Filmfare Award for his performance in Parinda. Still, his career did not really take off as some would have hoped. Nevertheless, Jackie is not one to ponder over such things, and over the years, this quality has made him truly unique.

Jackie was always unpretentious in every sense of the word. He grew up in a chawl and his lingo and body language were not sophisticated like other stars. By his own admission, he decided to polish himself somewhat because of his wife, Ayesha, who belonged to a very rich family. However, he never lost himself in an attempt to fit into the typical definition of a Bollywood celebrity. In one of Anil Kapoor's interviews, I heard him talk about how Jackie got convinced to do to 'Parinda'. The story is that Jackie came to the studio to meet Vidhu, where they were listening to/discussing a song for the film. Jackie heard the song and said, "Bot accha gaana hai, apun yeh film karega" (it is a very nice song, I will do the film). The makers responded by telling him that the song is to be picturised on his co-star Anil Kapoor's character, and not on him, to which Jackie replied: "arre apna bhai hai Anil, uspe mast lagega yeh gaana, apun karega yeh film" (Anil is my brother, the song will really look good on him, I will do the film). I am sharing this story because if it is true, it just shows us the man he is and that he has dared to be himself in such a difficult industry. Maybe that's why his career graph never reached the height that fits his talent. It may certainly be one of the reasons (other maybe his loyalty), because even today, he continues to live his life as unabashedly as ever. (case in point: check-out his Instagram handle 'apnabhidu').

Jackie Shroff is extremely loyal to certain people who have helped him in his career. Subhash Ghai and Vidhu Vinod Chopra are two people for whom Jackie has the highest regard. One gave him his first break and the other helped him win his best actor award. Since his first association with Ghai and Chopra, Jackie has done almost all roles they have offered him, without thinking of the consequences it may have on his career. Jackie gave Ram Lakhan, Parinda, and Tridev in a single year (1989). After a series of prominent roles, In 1991, Jackie did a small role in Saudagar followed by Khalnayak in 1993 (both with Ghai). In Khalnayak he was the so-called 'Hero' but the character was second fiddle to anti-hero Sanjay Dutt. On similar lines, in 1994, Jackie did 1942: A Love Story with Vidhu Vinod Chopra, a film where he once again was in a supporting role. Even though he did exceptional films as the lead (Gardish - 1993) and worked with big banners (Yash Chopra's Aaina - 1993), box-office success eluded him. He was nominated as Best Actor for Gardish (his finest performance till date) but did not win it. Next year, he won the Best Supporting Actor award for 1942: A Love Story, and maybe that finally typecast him as the 'supporting actor'. Once again, Jackie took everything in his stride and continued to be part of landmark films like Border, Rangeela, Devdas, along with critically acclaimed cinema like 3 Deewarein, Samay, and Khujli (short).

Today, Anil Kapoor and Jackie's other contemporaries are lauded for moving with the times and staying relevant, but somehow Jackie's name never makes that list. He has done so much and got so far with a pedigree that includes over 200 films, web series, short films, and many regional films. Though, what hasn't changed is his candid and nonchalant way of looking at his career and life in general. I think he should be immensely proud of the work he has done and all that he has given to the audience for close to 40 years. He made the Bollywood hero 'Super' (Shiva ka Insaaf) long before Kkrish, made motorcycles cool (Hero) long before Dhoom, made policemen macho (Ram Lakhan) long before Singham, made the underworld riveting (Parinda) long before Satya, and made a bespectacled man look dashing (Gardish) like no one else till date. Yet, Jackie's biggest feat, and certainly the filmiest, would be his own story. The man from a Mumbai chawl, made a name for himself in Indian Cinema, without forgetting his roots, without losing himself in the limelight and without pretending. All this is unheard of and so rare, that it only seems possible, as part of a Bollywood film. 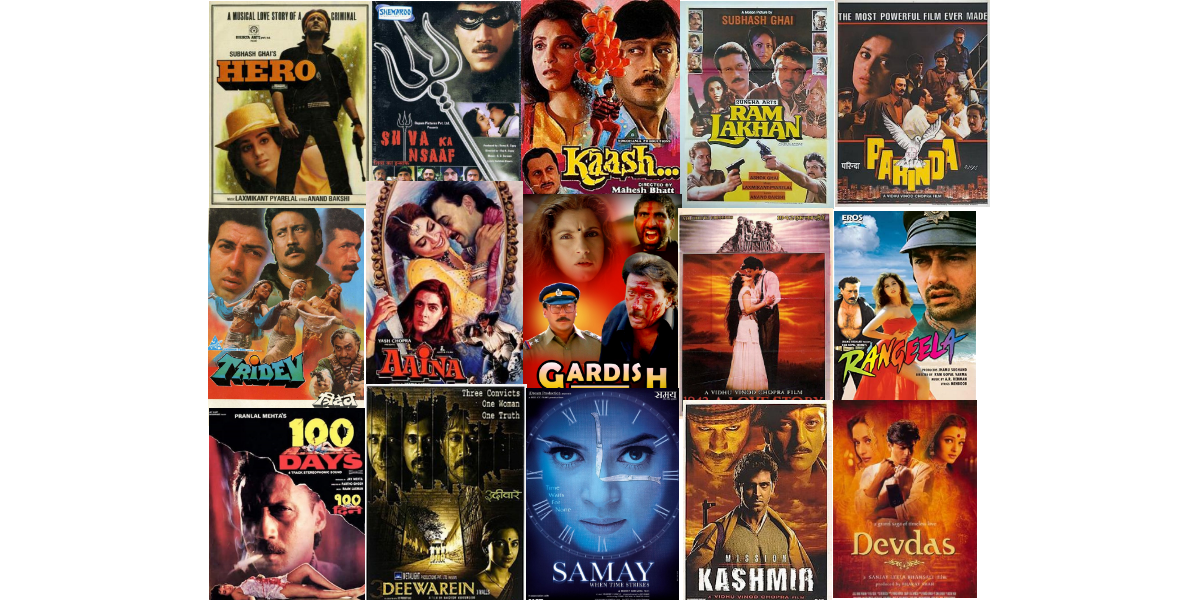 5. Parinda (watch it on Prime)

8. Gardish (watch it on MX Player)

10. Rangeela (watch it with Airtel)

14. Mission Kashmir (watch in on Prime)